Where in the World Is Ken?

As I write this, I have just returned to my abode from my Saturday stint at our A&E (Accident and Emergency) Department at the Georgetown, Guyana Public Hospital.

As I write this, I have just returned to my abode from my Saturday stint at our A&E (Accident and Emergency) Department at the Georgetown, Guyana Public Hospital. Unlike our emergency medicine residencies in the U.S., down here (South America, not Africa) our programs begin in mid-May. So, we have three new residents. However, they’re not brand-new doctors just out of medical school. Rather, they have had at least one year after internship, during which all of them worked in A&E departments. They hit the ground running and our three-year teaching program can begin at an advanced level. We also have an overlap that does not occur in the United States. That is, our senior residents (registrars) won’t take their final written and oral exams until September, so they are there to help inaugurate the newbies into the system.

What have I been seeing down here? As elsewhere, hypertension and diabetes are taking their toll. Lots of strokes; we have no tPA, only streptokinase in the country, so thrombolytic therapy is out of the question. Severe renal disease is rampant, and, unlike the U.S., most patients must pay for dialysis. Hyperkalemia is not an occasional problem, but occurs as life threatening dysrhythmias every day. Our residents are experts at recognizing and treating it. Diabetic complications also are common: diabetic feet, hypoglycemia, and DKA (diabetic ketoacidosis).

During rainy season, we see about one severe “Labaria” (Bothrops atrox) snake envenomation every other day. That season is about to arrive, so we’ve only seen a few. However, it seems like there is an ectopic pregnancy season, and we’ve been seeing at least three ruptured ectopics every day. Yes, our A&E ultrasound is in constant use and of great help in these cases.

Finally, how about the “weird” stuff? With Guyana having the second highest prevalence of HIV (second to Haiti) in the Western Hemisphere, we’re seeing every possible complication among the population refusing to take their ARVs (antiretroviral medication). It’s akin to the early days of the disease when there was no treatment, although the drugs are readily accessible and most of those affected are on them. Along with HIV, we have lots of tuberculosis, including a young man who presented yesterday in extremis from a tension pneumothorax from TB. He quickly got a needle thoracostomy — that worked! — and then we placed a chest tube. There’s so much work to do here that there’s never a hassle about who will do a procedure (we are expected to do emergency pericardiocentesis, for example).

Our huge Amazon forest also supplies us with scads of malaria, dengue, and leptospirosis patients, as well as a good number of septic neonates. It also supplies us with a range of “cutlass” (machete) injuries. This combination of illnesses and injuries makes for very interesting shifts.  Our major problem is having the supplies, equipment, and as usual in EDs everywhere, the space to treat the patients, even though we have nearly 50 beds and recliners in which to place them.

I hope you enjoy some of the accompanying photos: tension pneumothorax with temporizing needle thoracostomy; giant fishhook and removing it; an unusually quiet 7 a.m. in the A&E trauma area; result of an altercation using a broken glass bottle; another young patient to whom I gave a princess sticker (they love them); Ken visiting Vanderbilt faculty, and some local A&E faculty socializing. 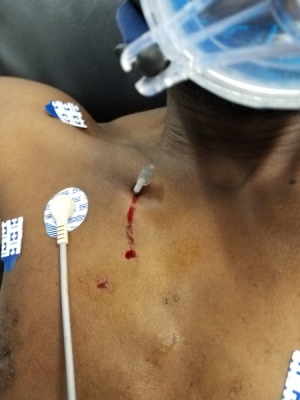 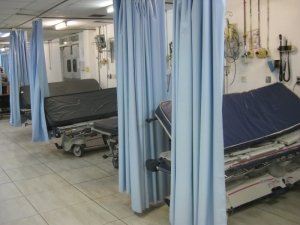 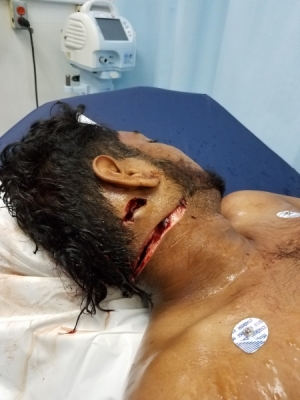 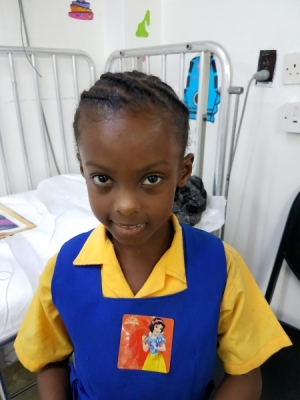 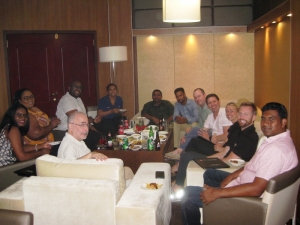